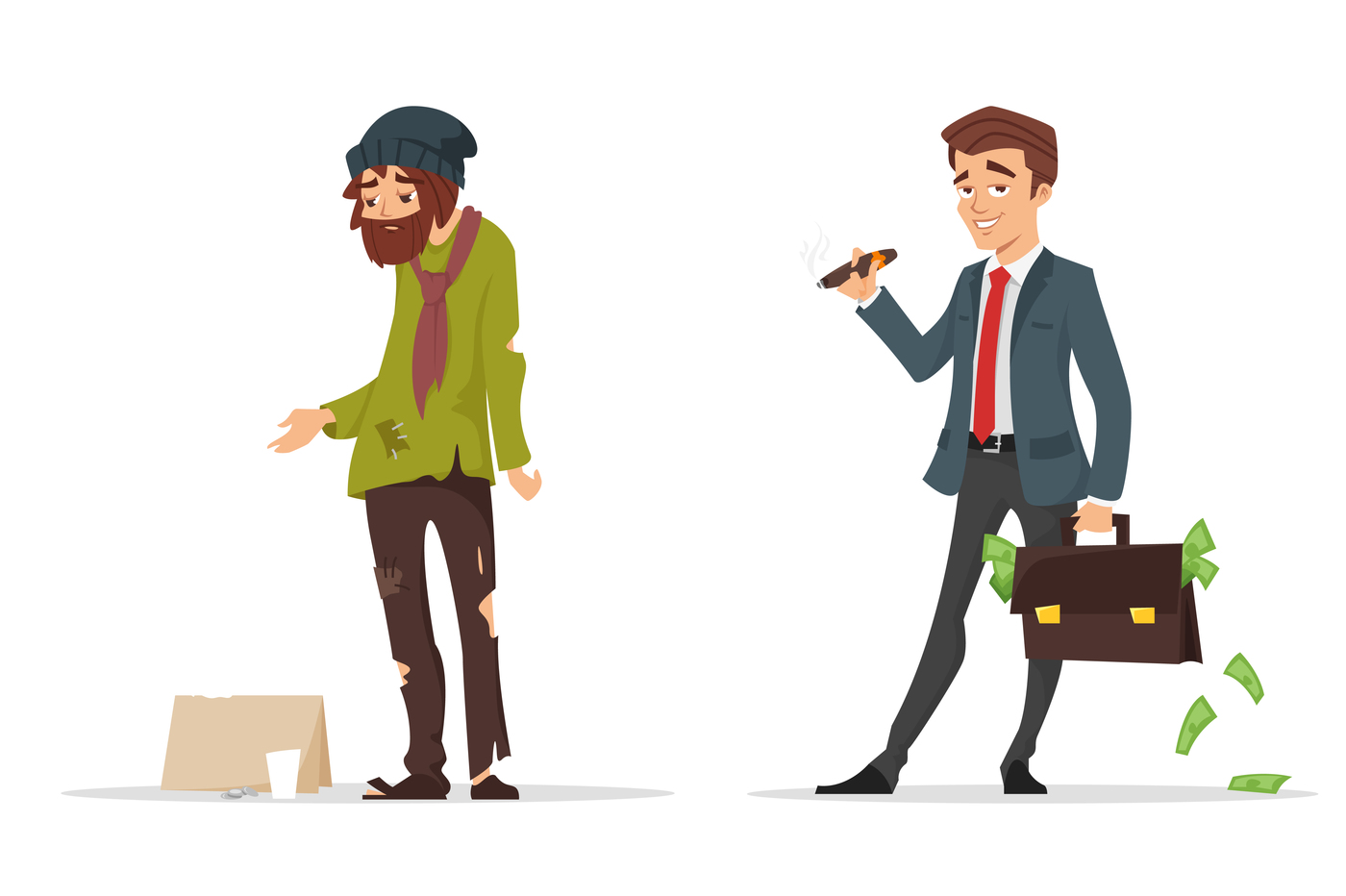 There are many men dressed in fancy suits, cohosted by women in extravagant pants suits, or suit jackets and skirts behind a camera being paid more than a little penny in about five of the six mainstream media programs informing individual viewers, whether they be poor, middle class or rich, daily speak that poor people are good because they are impoverished. The poor are victims of society, therefore the way they act must always be moral. The other side of the coin is that the rich are evil because they have all the money. The question the should be but never is brought up into question, with the rich being evil then logically speak if a news reporter makes more than well the average Joe, they must be evil. For some odd reason everything these rich people say on the T.V. is fact and must be believed according to them.

The narrative has dramatically and counterculturally changed since the time of Jesus. In His time the Jewish people taught the poor were cursed from God, and the rich were highly favored. This is completely backwards to today’s society. Jesus even said it was easier for a camel to go through a needle than for a rich man being able to get to heaven. In complete and utter shock his disciples asked, “Who then can be saved?” Seeing if the highly favored rich couldn’t then who could? Jesus response, with man it’s not possible but with God all things are possible.

Here’s a new painted picture that will destroy every class warfare narrative. There are morally good rich people, and the rich can go to heaven but not buying their stairway but having faith in Christ, he’s their only hope. Yes to the liberals who argue there are wicked rich people. An example would be the Hollywood elitists who surprisingly lean more liberal. One cannot group all rich liberals are wicked nor cannot say rich conservatives cannot fall into this line, however there were rich liberals who were busted for their perversions which inspired the current #MeToo movement. By the way some of the rich believe in open borders, some of the rich believe in gun control, some of the rich believe in paying higher taxes, but these rich people who do believe these more liberal policies have armed guards, and live in gated communities not dealing with the gun violence in cities where it is a huge problem, nor do they let any of these immigrants who come to this country illegally live in their mansions, many the author argues seem to be out of touch. These same rich people, not to say all the rich people, push for communism and really aren’t involved in the lives of working people let alone poor people, and haven’t offered once to just take care of the poor.

READ  THE ULTIMATE QUESTION IS ANSWERED

Poverty. Lest we forget that poor people like rich people are in fact people. Both rich and poor can be very kind, genuine, realistic, good, moral people, poor people can be greedy and not have a dime, despite rich greedy people existing and having a dime. Some people would argue they are impoverished and aren’t willing to work and demand the government care for them spread the wealth, because it’s greedy for someone who worked to keep their money to want to keep it, hurting middle class people from maybe being able to put food on the table. Poor people can steal, and unlike the rich we excuse the poor people for stealing a piece of bread for their poverty. We shouldn’t hate the actual impoverished, we should be involved in their lives, look after them, not just think oh my tax dollars will take care of them, people need relationships, they need to feel valued, and wanted, and just receiving money may keep you from real riches, such as love.

Let’s make this point hit home, and a very clear point. Poor people can only go to heaven by believing in Jesus. If the super-rich elitists rule over them and impoverish them with higher taxes as people condemn, that should be condemned, but if a poor person gets tax cuts, no taxes and are workers then the rich who rule over them aren’t oppressors or immoral. Sometimes people agree to low wages since the job is a start up job. Morality is not determined by socioeconomic status. Morality is based on values, how people value people, money, things, and teachings from our parents as acceptable right and wrong behavior.

READ  Liberals Should be Pro-life

Poor people love people differently then the rich. Despite the other person being poor they love them for them. This would be a stereotype to argue all poor people are like this, sure there are gold digging poor people because human nature does not escape the individual based off the socioeconomic status. Money is not the only attractive thing a person can have, an attractive physical appearance, a great personality, the values one grew up with and the intimacy between others are other attractive things.

Perhaps in the rich world one is loved for who they are by a rich significant other, or a poorer significant other. Human natural nature is still intact in a rich person they may want intimacy, compassion, a good looker, but maybe a great personality, maybe someone with similar values to them, and the company they keep isn’t much so. Say the rich person suddenly becomes poor will those who once stood by them when they were rich still standing by them or will they leave them because their loss of wealth? Are they really friends, or are they here for the money? That’s also how it is in the area of love, the trust should be genuine.

Then there is the whole money can’t buy happiness situation. There are two rich celebrities one on CNN, a cook known and loved by the world, his name was Anthony Bourdain. There also was a fashion icon Kate Spade known for her hand bags. What do Kate Spade and Anthony Bourdain have in common? Two maybe three things, one both were rich, two though rich the two were both very unsatisfied very unfulfilled with their lives so they each committed suicide. They had all the money in their world what could possibly be so bad? Maybe they were missing something, there was a hole in their soul, and a void?

READ  A CERTAIN NIGHT AT AUSCHWITZ

If being painted evil for being rich wasn’t pushed by the media by rich men and women richer than most people perhaps these suicides wouldn’t exist. Perhaps instead of being led astray by the media on a one-sided narrative, we as people come to more logical conclusions that the world is bigger than what we’re being told.  Perhaps there are some rich greedy people, perhaps there are some destitute moral poor people, no one is arguing against that as if it weren’t true, but perhaps there are some immoral poor people, and some God fearing, righteous rich people. Instead of this whole judge one person’s actions to the entire collective we start by getting to know each other, build relationships, have hard conversations, let go of our biases for one second to see the bigger picture, that people are people despite what they have materially or not.

Going against some stereotypes one hears on the news, this article will share a more big picture perspective of wealth and how things aren't as clear to the eye as we see them.
Stories
Disclaimer: The views expressed in the article above are those of the authors' and do not necessarily represent or reflect the views of HighlightStory.com.

READ  Why Free Speech Matters?
READ  What Your Number One Problem Is Likely To Be and Surprisingly, What It Is Not
READ  LOVE OR INFATUATION- WHICH ONE IS YOURS?
READ  A CERTAIN NIGHT AT AUSCHWITZ
READ  Liberals Should be Pro-life

READ  8 Writing Tips That Will Make You a Powerful Storyteller
READ  8 Tips on Spring Cleaning Your Closet
READ  A CERTAIN NIGHT AT AUSCHWITZ
READ  Why Free Speech Matters?
READ  LOVE OR INFATUATION- WHICH ONE IS YOURS?

READ  Mary Did You Know The Me Too Movement?
READ  THE ULTIMATE QUESTION IS ANSWERED
READ  What Your Number One Problem Is Likely To Be and Surprisingly, What It Is Not
READ  The Displaced America Trump Won’t Make Great Again And The Republicans Won’t Give A Path to Prosperity
READ  8 Tips on Spring Cleaning Your Closet