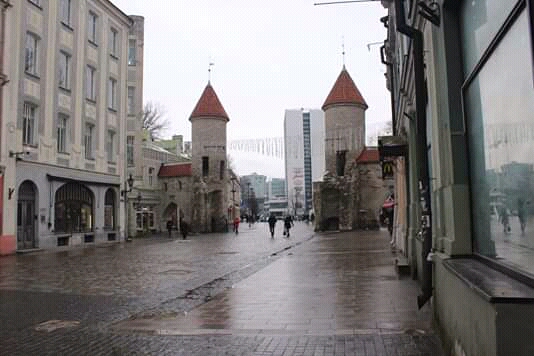 Estonia may be a country many Africans would scratch their heads over, when asked to place on the map. But this European Baltic state can be a force to reckon with, when it comes to technology ventures. Those who have visited that country may know that it is a digital nation, where citizens and residents access almost all goverment services and some private ones, as well as sign documents, entirely online, using their Estonian digital identities. Such a visitor would also learn that Estonia is the brains behind the creation of some of the world’s popular communications technology platforms such as Skype and  the first country to ever hold legally binding elections online (e-voting), among other achievements in the area of Information and Communications Technologies (ICTs). Estonia prides itself in having an open, transparent and accountable governance system, powered by the effective use of ICTs and has thus become known as ‘e-Estonia’.
With a tiny population of 1.3 million, the 45,227 square kilometres country has over years placed so much value on international friendship, perhaps owing to the role that  neighbours played in the past, to help the country out of its turbulant times, politically.
This is a country that is about 100 years old, but is said to have gained independence twice, in 1918 and 1991, respectively, the latter, after 50 years of Russian occupation.
Before and after independence, Estonia had maintained alliances with Western countries , such as Denmark and Sweden, who were so outspoken in her defence against Russian sanctions. Western recognition of Estonia’s legal independence was a major source of strength for that republic, in the struggle with the Soviet Union. As such, after 1991, that country worked to maintain relationships with such countries and integrated with European political organisations, such as the council of Europe, to ensure there were no further political threats from Russia and by August 1994, the last Russian troops stationed in Estonia, were finally withdrawn. From there on, Estonia has continued to solidify its relationship with the international community and further spread its wings to places like Africa.
The republic’s strength now lies in its admirable technological advancements, after years of rebuilding, post-independence. For example, the country’s transformation into a digital nation means citizens now only need to enter their electronic ID numbers and all service providers in public institutions can access their information, with no need to fill in papers or unnecessary bureaucracy, which contributes to speedy service delivery. WiFi is readily available everywhere in public  for free and without needing a password, because access to that is a human/social right and children are introduced to ICT education at an early stage in primary school, learning more than just computers, but proper coding and other applications. Also free for residents, is public transport in the capital city, Tallinn.
In her recent independence day speech, February, 24, 2019, Estonia’s President, Kersti Kaljulaid, described her country as a leader even among wealthy nations, being ‘a state that offers universal forms of assistance and free services to all its residents’. “It is a country that has applied innovative solutions in the public sector like no one else,” she claims.

Through Estonia’s foreign policy, the country’s doors have been opened up for global cultural and trade partnerships, with some of that country’s startups, such as ‘Taxify’, an international transportation network company, ‘TransferWise’, a money transfer service and others, being spread across the world, while foreign businesses are also encouraged to operate in Estonia, through a programme called e-Residency, which allows  anyone to become an Estonian digital resident and be able to open an EU-based company, online.
“Estonia is no longer a friend in need, but we”ll continue to be a friend indeed. The difference now is that Estonia officially recognises its relationship with citizens of other countries living beyond our borders and we have the technology to provide more value to everyone as a result of those connections,” says Ott Vatter, the Managing Director at e-Residency
Anyone can join the digital nation and become an e-resident, by registering on: (https://e-resident.gov.ee) and receive their own Estonian digital identities.
Once the ID, which normally takes a few weeks to reach the applicant, is received, it  enables the person to immediately open a company and start operating.
So, this is where Africa comes in. As is universally acknowledged, international trade is an important factor in raising living standards, employment creation and giving consumers access to a variety of goods and this is evidently, of high importance to African countries, where unemployment and poverty levels are high. Breaking into the Europeanan Union (EU) market, means having access to about 26 countries, since the EU is comprised of that many. It is usually not easy for African business people to access such international markets  due to travelling challenges, expenses and bottlenecks associated with obtaining visas or permits to travel and operate in Europe. Therefore, owning a web-based company in Estonia, would cut down such difficulties as E-residents don’t  have to worry about travelling and can operate their businesses from whereever they are, in the world. Through the E-residency ID,  it is easy to digitally sign contracts and other documents. By virtue of having a business there, you get connected to Estonian services, such as banking and online payment systems, which means you are able to get and make your payments world-widely, through easy transfer in foreign currency and don’t have to worry about currency fluctuations, which is common in Africa.

As an e-resident, you get to among other benefits, operate in a flexible, cost-saving manner and increase your  international visibility, as well as network opportunities as follows:
Through E-residency, one can choose to partner with other Estonian companies, but also run entirely online with minimal cost and hassle and that gives an entrepreneur operation options and flexibility.
An Estonian company is a European Union company and would benefit from the same access to EU customers and startup funding, thereby making it more internationally visible and help it expand its business’ footprint.
Another attribute of E-residency is that it promotes transparency, because companies are required to openly share their operation information, which helps them to be seen as credible, especially if they originally operate in countries or environments that are less trusted.
Being an online-based company means cutting down on costs associated with acquiring an office and stationary, as one manages a location-less and paperless company.
In an event that an e-resident moves abroad,  they wouldn’t need to re-establish their companies and that allows for uninterrupted continuity in business.
For example, a ‘Technologist’ only known as John, from Turkey, who has conducted his Estonian business from the US, says he has been able to handle several projects in different locations from the comfort of his chair, without needing to travel (https://e-resident.gov.ee):
“I hate being tied to one company/country, so I needed a legal solution around this, one that has no geographical boundaries. Having a company in Estonia addressed all these problems. Estonia opened their doors to people like me-ambitious entrepreneurs and digital nomads who are looking to avoid physical boundaries in doing business. If you’ve travelled your whole life like I have and are keen to remain location independent, then becoming an e-resident is for you,” he advises.
A recently developed white paper, in consultation with a wide range of stake holders and published at the end of last year, has 49 recommendations for implementing e-Residency 2.0. Among the listed visions of the Estonian government, in the said paper, is to find ways of bringing more female entrepreneurs on board, in order to diversify the programmes community, hence this could help empower economically, African women entrepreneurs, a number of whom tend to engage in cross-border trade, as it is.
Take another Turkish global entrepreneur, Arzu Altinay (https://e-resident.gov.ee), who narrates how  her tourism business is expending globally, offering guided tours in her country for clients from all over the world. She needed a system through which her clients could make payments for her services, before they travelled, after PayPal was stopped in her country and business started declining. The only way out, she says, was to open an account in another country, which e-residency made possible and that helped her to get back on track.
“I searched for solutions in the US, UK, Netherlands, Germany, Denmark, Canada, but my business model was not something these countries were interested in for various reasons. It wasn’t disruptive, it wasn’t innovative…it wasn’t a sector any of these countries were interested in, ” Altinay recalls, adding that it was at that point that she came across e-residency:
“One day, I just saw this beautifully designed blue page that asked: Do you want to operate an international business? Is your business online? Do you want an EU company that you can run globally? Do you want to accept international payments? Yes! Yes, to them all,” she narrates.
To cut a long story short, she immediately ventured into the e-residency programme and says she was then able to establish a company, which is regulated around the world and was able to, among other things, open a bank account at Swedbank. That way, it prevents her from losing out on exchange rates.
Altinay adds that she’s also able to transfer payments to her local guides without having to pay transfer fees and no company tax, until she takes out dividends.

Even though ultimately, E-residency may serve more as an economic – booster for Estonia, through among other revenue streams, direct taxation and employment creation, when e-residents partner with locals, for that to work smoothly, the e-residents’ businesses must first or equally prosper, hence that government’s resolve to give as much support as possible to achieve success, as Vatter affirms:
“We are aiming to help e-residents establish 3, 250 new companies this year [2019] – but more importantly, we are also aiming for a 50% growth in the economic contributions of all e-resident companies… The e-Residency programme only succeeds when e-residents build successful companies, “.
That mere determination should be assurance enough for entrepreneurs to know that it could be worth giving e-Residency a go.

Glory Mushinge, a Master of Arts in International Journalism, Media and Cultural studies and International Human Rights Law, post graduate at Cardiff University's Media and Laws Schools, respectively, is an award-winning Zambian International Freelance Journalist, Researcher and Media Consultant. Email: glory.mushinge@gmail.com
READ  8 Writing Tips That Will Make You a Powerful Storyteller
Stories
Disclaimer: The views expressed in the article above are those of the authors' and do not necessarily represent or reflect the views of HighlightStory.com.