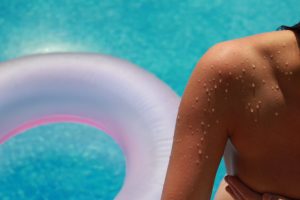 Have a mole that has raised some concern? New studies have revealed that existing moles are the source of less than one-third of melanomas. The majority appears on the skin as new spots.

Let’s start at the beginning. Melanoma is the most dangerous form of skin cancer and is often caused by ultraviolet radiation from sunshine or tanning beds. Damaged skin cells trigger mutations that lead to the rapid multiplication of skin cells that consequently form malignant tumours.

You have a mole. Should you be worried?

While any existing or new skin abnormalities should be checked by a dermatologist, new research has shown that most melanomas do not originate from existing moles. Researchers have reviewed 38 published studies comprising 20 126 melanomas, and they’ve found that only around 29% arose from existing moles while the other 71% appeared on the skin as new spots.

“These results could indicate that patients who monitor their existing moles for suspicious changes could detect melanoma in its early stages when it’s most treatable,” says study author Caterina Longo, MD, PhD, a dermatologist at the University of Modena and Reggio Emilia in Italy. “Because the disease is more likely to appear as a new growth, however, it’s important for everyone to familiarize themselves with all the moles on their skin and look for not only changes to those moles but also any new spots that may appear.” – Source

The warning signs of Melanoma

A – Asymmetry: If you draw a line through a mole and both sides do not match, being asymmetrical, it should be seen as a warning sign for melanoma.

B – Border: If the mole is benign, it will have smooth, even borders whereas, with melanomas, the borders tend to be uneven.

C– Colour: Benign moles are often a shade of brown however if you have a mole in various colours, it is a clear warning sign. Melanoma often becomes red, white or blue.

D – Diameter: Benign moles are often smaller than malignant moles. Melanomas are usually bigger in diameter than the eraser at the tip of a pencil.

E – Evolving: Benign moles tend to stay the same over time however, you should be on alert when the mole starts to change in any way. Consult a doctor when the mole changes in size, shape, elevation, colour or if you experience symptoms such as bleeding, itching or crusting.

The most important thing is to never leave the house without sunscreen on. Be it sunshine, rain, snow or wind, you’ll thank yourself in future and spare yourself painful sunburn that may lead to more sinister outcomes.

Health
Disclaimer: The views expressed in the article above are those of the authors' and do not necessarily represent or reflect the views of HighlightStory.com.

READ  Get to Know about Hgh Supplements
READ  Can I Get Braces if I have Dental Crowns?
READ  The science behind charcoal toothbrushes. Does charcoal toothbrush work?
READ  Yoga For Men
READ  Medical Marijuana – ‘9’ Health Benefits You Can’t Ignore!

READ  Causes and Treatment of Dry Skin Around the Nose
READ  Tips And Benefits Of Having Healthy Lifestyle
READ  35 Ways To Help Your Kids Strengthen their Immunity And Build Resistance Naturally
READ  Best 10 Golden Tips to Staying Healthy
READ  The science behind charcoal toothbrushes. Does charcoal toothbrush work?

READ  Tips And Benefits Of Having Healthy Lifestyle
READ  Causes and Treatment of Dry Skin Around the Nose
READ  Yoga For Men
READ  Medical Marijuana – ‘9’ Health Benefits You Can’t Ignore!
READ  Can I Get Braces if I have Dental Crowns?