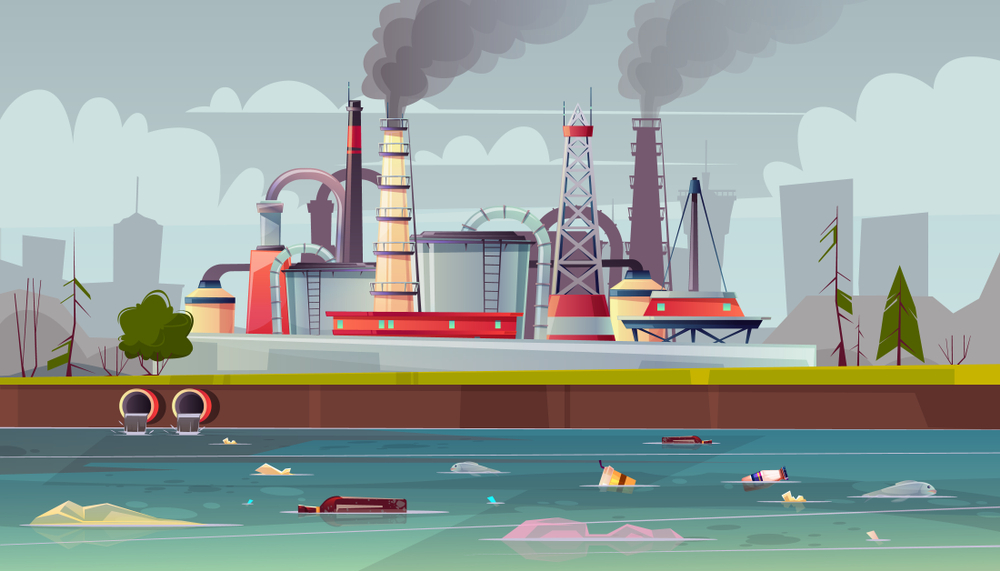 Pollution is the contamination of water and air by substances harmful to life. It can occur naturally such as gases from volcanic eruptions that pollute the air. Types of water pollution include man-made such as oil and chemicals that spill on oceans and the industrial waste that seeps into the soil and both are equally destructive to the environment.

The biggest threats the planet and its inhabitants face are air and water pollution. These are the very elements that give life to all life forms. Plants need air and water but absorb toxins, oceans that are home to marine life become acidic, life-giving air is heavy with noxious gases – all are threats to humans and all forms of living organisms.

The oceans and all sources of water have not been spared. Drilling for natural gas also contributed to water pollution.

In their introduction to water pollution, Water Pollution and Society, David Krantz and Brad Kifferstein of the University of Michigan presented estimates that at least 5 million people die of water borne diseases while 1.5 billion people do not have adequate safe drinking water. This is how far gone the planet where the effects of water pollution are concerned.

READ  Save the Trees - Preserve Nature & Improve your Health

Ocean pollution is another type of contamination the planet faces. The vast oceans have become the biggest garbage pit. According to Greenpeace, 45000 man-made chemicals have found their way to the oceans and there is a floating trash the size of Texas. Plastic wastes, old tires, bottles, sludge from sewage and every imaginable waste are out there swirling along with the vortex that is the North Pacific Gyre.

Governments are hurrying up to save the planet by enacting laws to control or eliminate air and water pollution. Researchers are developing risk assessment tools, monitoring technologies, and remediation techniques of water pollution prevention to minimize or avoid pollution problems.

Governments and science are working together with industries to combat the problem at the root by understanding the effects of contaminants as these diffuse through water, land, and air.

In the US the first federal environmental legislation to control air pollution was the Air Pollution Control Act of 1955. This established research on monitoring and containing air pollution caused by interstate air transport. There were several changes in the said law and the last was the 1990 Clean Air Act Amendments.

Sharing concerns over how to stop water pollution, specifically ocean pollution the US Congress also enacted the Act to Prevent Pollution from Ships. On a global scale, awareness of environment issues has given rise to global environmental law.

This will change the way world tackles environmental pollution. But governments need the political will to carry out these laws because these laws will affect big industries.

How Can We Stop Pollution?

There are a lot of things we can do to stop pollution but pollution won’t go overnight. It is a long term process to make it stop and we have to look at hundreds of factors before doing so. But we can do our share by eliminating the use chemical based cleaners, repairing your car leaks, reporting dumping of toxic waste, and disposing hazardous waste at hazardous waste collection centers. Setting up green power in our home to minimize the use of electricity which is one of the biggest pollutant of the environment.

I am a journeyman plumber, and have been in the plumbing and HVAC business since 2005. I have often been concerned about the low level of water and air quality being experienced in many homes and businesses in the Greater Edmonton area and Lakeland Region.
Nature
Disclaimer: The views expressed in the article above are those of the authors' and do not necessarily represent or reflect the views of HighlightStory.com.